Patti Callahan: Once Upon a Wardrobe

From Patti Callahan, the bestselling author of Becoming Mrs. Lewis, comes another enchanting story that pulls back the curtain on the early life of C. S. Lewis.

“Where did Narnia come from?”

The answer will change everything.

Megs Devonshire is brilliant with numbers and equations, on a scholarship at Oxford, and dreams of solving the greatest mysteries of physics.

She prefers the dependability of facts—except for one: the younger brother she loves with all her heart doesn’t have long to live. When George becomes captivated by a brand-new book called The Lion, the Witch and the Wardrobe and begs her to find out where Narnia came from, there’s no way she can refuse.

Despite her timidity about approaching the famous author, Megs soon finds herself taking tea with the Oxford don and his own brother, imploring them for answers. What she receives instead are more stories . . . stories of Jack Lewis’s life, which she takes home to George.

Why won’t Mr. Lewis just tell her plainly what George wants to know? The answer will reveal to Meg many truths that science and math cannot, and the gift she thought she was giving to her brother—the story behind Narnia—turns out to be his gift to her, instead: hope. 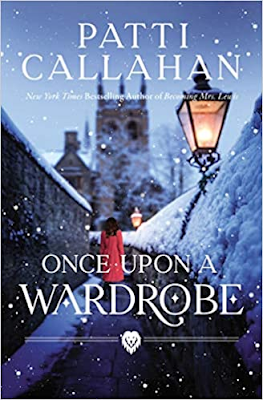 I am a huge fan of C. S. Lewis. I love reading his biographies and learning about his creative process. I love learning about how important imagination is to him. It is important to me too, so I really love reading about his life. I have read so many books by him and about him. I wrote three essays in college using his stories, letters, biographies, and autobiographies to craft these essays. I read Becoming Mrs. Lewis by Patti Callahan, and I loved learning more about Joy Davidman, so I could not wait to read this next novel that dives into Lewis’ world again. The cover to this novel draws me in, and I really could not wait to dive into this story. Being familiar with many of Lewis’s biographies, I really knew what the story was going to be about. The story is basically a split-time novel. We have the present day story where Meg is visiting Lewis and his brother, Warnie, then flipping back to telling the past stories to George. While the writing was good, I felt like I was in England, which I have never been, and enjoyed that the story takes place during the winter in England. As an avid reader of Lewis’ life, I knew pretty much all of the stories that Meg told George. Nothing new there. Not that I did not mind this. It might be a great way to introduce new readers to Lewis life. Another thing that bothered me was that Callahan really did not explain the real answer to the change in Meg and George’s life at the end of the story. It was hinted out, but never told out right what it was. Also, the last chapter was very confusing. I did not really know whose perspective the chapter was in. Overall Once Upon a Wardrobe by Patti Callahan is a good introduction to fans of Lewis’ Narnia series but really not much else about his life. I think a physical copy is still needed in my library.

I received a complimentary copy of Once upon a Wardrobe by Patti Callahan from Harper Muse Publishing, but the opinions stated are all my own.

Purchase Once upon a Wardrobe

Email ThisBlogThis!Share to TwitterShare to FacebookShare to Pinterest
Labels: Harper Muse Publishing, Kelly Bridgewater, Once Upon a Wardrobe, Patti Callahan