He fled the future with blood on his hands. Now, he’ll do anything to stop a killer.Tragedy has yet again taken from Detective Rembrandt Stone everything he loves. Now, he has one last chance to get things right and stop a killer he’s been hunting across four timelines. Instead, he gets tangled in a petty crime that just might cost him his once chance at justice.With two murders to stop, and thirty-eight lives still in the balance, Rembrandt must play his hand against time just right if he wants to win his future. Play it wrong and his life will stay shattered beyond repair.What sacrifices will he have to make to come home to his wife and daughter?The stakes have never been higher in the heart-wrenching, edge-of-your-seat fifth story of theTrue Lies of Rembrandt Stone. 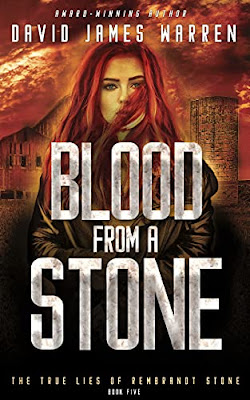 Blood from a Stone by David James Warren for the fifth time allows readers to time travel with Rembrandt to the past as he tries to fix the future back to the way it was. Of course, more problems arise. After having failed four times, he hopes and prays that the fifth time is the charm. Again with the knowledge of past events, he tries to stop the crimes before they occur, but it does not end up correct and a domino effect of errors start occurring. After reading all five novels at this time, I really can’t wait to see how Warren ties up this series. Does everything go back to the way it was? Does Rembrandt learn to accept life the way it is? The plot continues to showcase danger and the hunt for the Jackson Five killer. I do enjoy the amount of action that is crafted in the novel. I do enjoy that Warren has Rembrandt try really hard to win his wife’s Eve affections. Overall, Blood from a Stone is another thrilling installment, and I can’t wait to get my hand on the final book and see how this series ends.

I received a complimentary copy of Blood from a Stone by David James Warren from Sunrise Publishing, but the opinions stated are all my own.

Purchase Blood from a Stone