When dark forces rise, are faith and firepower enough?

On the eve of his medical retirement, Navy SEAL Jedidiah Johnson receives a frantic call from his estranged childhood best friend David Yarnell. David's daughter has been kidnapped off the streets of Nashville in broad daylight. The police have no suspects and no leads. The only clue: the body of a dead priest left behind at the scene. With the clock ticking, David is growing desperate, as is his wife, Rachel . . . Jed's first love.

Despite his painful history with David and Rachel, Jed agrees to help. But he's spent his career as a door-kicking Navy SEAL, not an investigator. His presence immediately draws unwanted attention, creates friction with the local police, and triggers a mysterious attempt on his life. Just when he thinks things can't get worse, it starts to happen again--the voices in his head, the nightmares, the visions. Dark memories and strange abilities, things he believed he'd left behind when he fled Nashville for the Navy at eighteen, begin to resurface.

Jed realizes that to save the missing girl, he must take a leap of faith and embrace the gifts he's denied for all these years. To foil this dark intercept, he'll need more than just his years as a SEAL operator, because he has no choice now but to take up arms and join the battle in the unseen spiritual warfare raging all around him. And there is far more at stake than just a missing girl: the world is not the place he thought it was--and he is not alone. 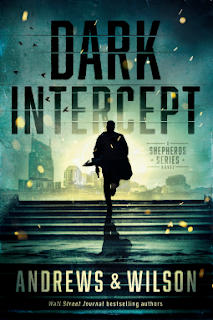 Dark Intercept by Brian Andrews is a huge hit in my book. I had a really hard time putting the novel down. Tons of actions. Tons of darkness. Tons of running. Tons of shooting. Kidnapping. Mystical, Spiritual Elements. This novel kept my attention and did not let go. At first, when it started in the Middle East, I sighed in defeat because so many spy or military novels start over there. I did not want to read another one of these novels. But once you move past the first couple of chapters, it really takes off. A lot of unknowns, which kept me begging for the authors to tell me. I sat and devoured the novel. It was fabulously written. Since this was labeled as book #one, I really hope there are more novels. I can't wait to put this novel on my keeper shelf. I highly recommend this novel to fans of high octane action with the twist of spiritual warfare.

I received a complimentary copy of Dark Intercept by Brian Andrews from Tyndale Publishing, but the opinions stated are all my own. 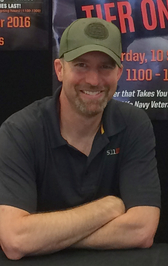 Brian Andrews is a US Navy veteran, Park Leadership Fellow, and former submarine officer with a psychology degree from Vanderbilt and a masters in business from Cornell University. He is the author of three critically acclaimed high-tech thrillers: Reset, The Infiltration Game, and The Calypso Directive, and co-authors the Wall Street Journal and #1 Amazon best-selling TIER ONE thriller series with Jeffrey Wilson. (Taken from Goodreads.)
Posted by Kelly Bridgewater at 2:30 AM