Delia lives a quiet life as the daughter of an earl in late 14th-century England, but that peace is shattered when her seven brothers are betrayed by their father and falsely arrested. Meanwhile, with the Peasants’ Revolt threatening the peace of the kingdom, the king is executing anyone who had anything to do with the uprising. Delia is terrified her brothers will be next, the youngest of whom is only ten years old.Delia infiltrates the palace as a lady-in-waiting for the new queen so she can be near her brothers in the Tower of London and help them escape. When she runs into Sir Henry, the guard captain who arrested her brothers, she hates him—until she discovers he has been secretly carrying food to her brothers in their prison cell. Trapped into obeying the orders of his king, Sir Henry is the oldest son of an earl whose estate has been seized by the king and his treacherous advisers. His first mission as captain was to arrest seven brothers for treason, but he had no idea that the brothers were so young or that their sister would be so feisty and beautiful.In a court where everyone is eager to backstab anyone else to get what they want, how will Henry right this wrong and help Delia and her brothers—especially when Delia hates him? And how will he keep them both from losing their heads to this execution-prone king? 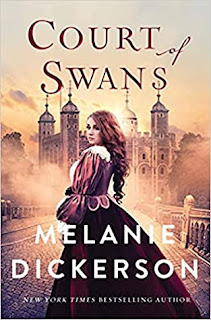 I have read all of Melanie Dickerson's stories, and I was glad to finally see her branch out from her Haggenheim series. It has been long, and started to sound a little repetive. While I enjoy Dickerson's style of writing, I was glad to see something a little different. Dickerson does not disappoint. I really liked how she crafted the story. I couldn't imagine having seven brothers and have them all accused of treason against the King. There was one issue that did bother me, and it was the beginning of the novel. I didn't understand why we were at a wedding, then jumped three years, then jumped six months. I would have preferred to start the novel with the capturing of her brothers, and then allowing us to see the hatred of her step-mother as the story moved along. I wondered why the step-mother did not go after Delia as she traveled to where the brothers were being held captured. Even though the story did have its quirks, I still was enthralled with the writing and the story. I can't wait to see what story Dickerson will show readers next.

I received a complimentary copy of Court of Swans by Melanie Dickerson from Thomas Nelson Publishing, but the opinions stated are all my own.