As a former field surgeon in Afghanistan, Heather Fontaine is used to life-or-death situations. She just didn't expect them to follow her home. When she returns from a party to find that someone has broken into her house--and threatened her friends--she assumes it is the stalker who has been following her and creeping her out. She hopes to find safety and peace of mind by leaving the city and hiding out in a small town. But trouble has followed her even there.

Luckily, a stalker isn't the only one watching Heather. Travis Walker has been secretly watching out for her for weeks. As owner of his own security agency, it's what he does. Together, Travis and Heather must figure out who wants her dead--and why--before it's too late.

Bestselling and award-winning author Lynette Eason will have you looking over your shoulder as you dive into this fast-paced, suspense-filled story about losing control and finding something even better. 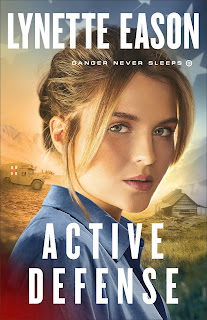 Active Defense is fast flipping story told from Heather's perspective. Lynette Eason does a wonderful job at bringing these active soldiers to life as they bring home their trouble from the tours in Afghanistan. I enjoy a novel that features a run for their lives and a hunt for justice and a serial killer. Eason does a fabulous job at crafting a story that captures my attention and does not let go.  Active Defense is the third book in this series, and Eason will not let her readers down. She does exactly what is expected. Sometimes I even found the story a little repetive and predictable. Overall, Eason did a wonderful job at crafting a story that features the thrills and the characters that fans of romantic suspense will enjoy.

I received a complimentary copy of Active Defense by Lynette Eason, but the opinions stated are all my own.