Disappearances, strange activities in the night, and secret organizations abound in this mysterious Regency romance.

Haunted by the assault she’s kept hidden over the past four years, Charity Halliwell finally has a chance to return home to the quaint village she left more than five years before and the happy life she wants so badly to reclaim. All she needs is good conversation with her old friend and an opportunity to find a governess position, and she can leave the fear and guilt behind. But the family who agrees to her yearlong visit turns out to be a far cry from the one she thought she knew, particularly when her friend disappears and the one man she made certain would not be at the house is forced to return. How can she possibly heal and claim her independence when day in, day out she must face the only gentleman who ever held a piece of her heart?

Piers Cavanagh was branded a coward when he failed to show up for a duel he arranged. He had his reasons, of course, but disclosing them would hurt far more than continuing life as an outcast. And worse, with the mysterious departure of his sister, the strange nightly occurrences in the ruins of an old abbey, and the uncomfortable whispers of a secret organization, Piers must overcome his aversion to society and work with the last person he ever thought he would get the chance to speak to again—the girl whose heart he had no choice but to break. 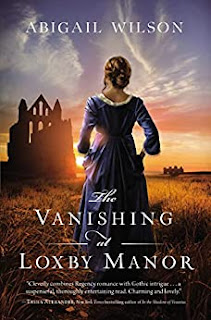 The Vanishing at Loxby Manor by Abigail Wilson is an enticing mystery of a missing person and a scandal that rocks a wealthy family. I really enjoy mysteries and historical romances, but not many people do justice to the combination genre. Most historical mysteries writer usually lean more toward the romance and the historical side, forgetting that they were supposed to include a mystery in the story too. But not Wilson. She does a wonderful job at crafting a plot that focuses on the mystery element and allows the history to shine through the background, setting, and the characters. While the 180 degree transformation of the characters is important to the plot, in Wilson’s novels, the characters did a 360 degree turned and returned to where they were when the story began. They had a little break in their relationship, but they came back and realized the importance of each other in their lives. While this didn’t make or break the romance, it does seem a little too predictable for me. As for the plot, it was nicely handled and well-developed. I enjoyed the mystery and kept flipping through the screens on my Kindle, wanting to know who did the crime and where the missing girl went. Overall, The Vanishing at Loxby Manor by Abigail Wilson will be on my forever shelf with her other three novels. I’m really curious on what she will compose next.

I received a complimentary copy of The Vanishing at Loxby Manor by Abigail Wilson from Thomas Nelson Publishing, but the opinions stated are all my own.

Purchase The Vanishing at Loxby Manor