Jen Turano: To Write a Wrong

Miss Daphne Beckman is a mystery writer by day, inquiry agent by night. Known for her ability to puzzle out plots, she prefers working behind the scenes for the Bleecker Street Inquiry Agency, staying well away from danger. However, Daphne soon finds herself in the thick of an attempted murder case she's determined to solve.

Mr. Herman Henderson is also a mystery writer, but unlike the dashing heroes he pens, he lives a quiet life, determined to avoid the fate of his adventurous parents, who perished on an expedition when he was a child. But when he experiences numerous attempts on his life, he seeks out the services of the eccentric Bleecker Street Inquiry Agency to uncover the culprit. All too soon, Herman finds himself stepping out of the safe haven of his world and into an adventure he never imagined.

As the list of suspects grows and sinister plots are directed Daphne's way as well, Herman and Daphne must determine who they can trust and if they can risk the greatest adventure of all: love. 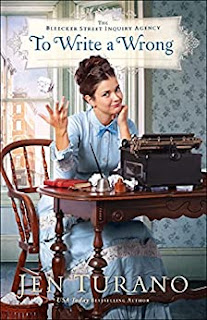 To Write a Wrong by Jen Turano is a funny novel. There were numerous moments where the characters were placed in a funny moment. There is a scene with an axe that made me giggle. Turano creates vivid, vibrant characters who jump off the page. None of her characters fit the typical norm for woman of this era, which I love. The characters are smart, funny, and charming. I love the heroine, Daphne, this time around. She was smart and a writer. I love how she works at the Bleeker Street Inquiry Agency and writes mystery novels at the same time. Herman is a loving and sweet hero who finds the odd ball Daphne appealing and is drawn to her. Their romance story was sweet and kind. Overall, To Write a Wrong by Jen Turano is a delightful story that allows my imagination to flourish, and I really love the mystery element this time around. Highly recommend for readers of Turano’s other novels and historical romantic comedies.

I received a complimentary copy of  To Write a Wrong by Jen Turano from  Bethany House Publishing, but the opinions stated are all my own.

Purchase To Write a Wrong