Trapped in time, he’ll have to use the past to fix the present.

Thirty-eight women. Dead. All the in the past. All because Detective Rembrandt Stone played with fate, and somewhere in time unleashed a serial killer. He can’t undo their deaths, not anymore, but the serial killer is still at large, twenty-four years later, and now it’s personal. Especially when the evidence points to the last person on anyone’s radar: Rembrandt himself.
Now he’ll have to use the clues from his pasts to track down the killer in the present.

But the killer is onto him and puts the one person Rembrandt loves in his cross hairs. Now, Rembrandt must outwit time to save the people he loves.

Because time is playing for keeps.

The fourth installment of the True Lies of Rembrandt Stone will have you holding your breath and leave you gasping for more. 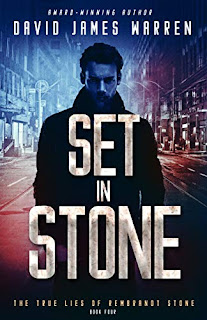 This time, in Set in Stone, Rem Stone hits the mystery a little closer than ever to his home. Solving the mystery of the Jackson Killer takes over his thoughts and his actions as Stone tries to still work through understanding the difference between what his real present life is to what he has done to change things. I can't imagine trying to figure out what is the current reality and what has changed as he has moved through the time differences. Every time Stone does something that affects what his future would be, so he tries to change it. This time, the plot does move a little closer, but of course, something goes wrong, and Stone needs to fix it. I definitely enjoy the stories, and I really believe that you need to read these stories in their published order or readers will be confused. There are two novels left in this series, and I can't wait to see what Warren does to end the series. I wonder if Stone will actually arrive back in his normal life before the time traveling started.

I received a complimentary copy of Set in Stone by David James Warren through JustRead Tours, but the opinions stated are all my own.