Todd M. Johnson: The Barrister and the Letter of Marque

As a barrister in 1819 London, William Snopes is a strong advocate who chooses to defend the poorer classes against the powerful. That changes the day a struggling heiress, Lady Malissa Jameson, arrives at
his door.

In a last-ditch effort to save her faltering estate, Lady Jameson invested in the acquisition of a merchant brig, the Padget, allowed by a letter of marque from the king's regent to legally capture cargo from French traders operating illegally in the Indian Sea. Yet when the ship returns to the London harbor, it's met by constables and soldiers ready to seize its goods, accusing the sailors of piracy. And the letter proving their legality has disappeared.

Moved by the lady's distress, intrigued by the claimed letter, and goaded by an opposing solicitor, William Snopes cautiously takes the case. But as he gets deeper into the mystery and prepares for trial, he learns that the forces arrayed against Lady Jameson, and now himself, are even more powerful than he'd imagined. 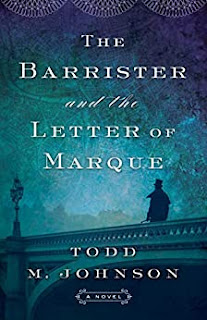 The Barrister and the Letter of Marque by Todd M. Johnson is a Victorian era lawyer procedural novel. The story starts with setting the background for the novel, then jumps right into the action leading up to the climactic moment where the court proceeding occurs. The Barrister, William, ran away from his families fortune to pursue the career in law. The skills from this time period versus today is different, but with less technology. This story does prove how smart the lawyers aka barristers actually had to be in order to solve the mystery. The plot was pretty lengthy. There were moments that progressed the story alone, but then there were moments where the story stood still, and the plot didn't advance. While the mystery and the court proceedings captured my attention, I wanted a little more mystery to make it feel like a Victorian style mystery like Jack the Ripper and Sherlock Holmes. Overall, if readers enjoy lawyer and court stories, then this might be right up their alley.

I received a complimentary copy of The Barrister and the Letter of Marque by Todd M. Johnson from Bethany House Publishers, but the opinions stated are all my own.

Purchase The Barrister and the Letter of Marque