Amanda Dykes: Yours is the Night

A mysterious song in the forest . . .
A discovery in war-torn France . . .
A journey toward hope.

The trenches of the Great War are a shadowed place. Though Platoon Sergeant Matthew Petticrew arrived there with a past long marked by shadow, the realities of battle bring new wounds--carving within him a longing for light, and a resolve to fight for it.

One night, Matthew and his comrades are enraptured by a sound so pure, a voice so ethereal, it offers reprieve--even if only for a moment. Soon, rumors sweep the trenches from others who have heard the lullaby too. "The Angel of Argonne," they call the voice: a mysterious presence who leaves behind wreaths on unmarked graves.

Raised in the wild depths of the Forest of Argonne, Mireilles finds her reclusive world rocked when war crashes into her idyllic home, taking much from her. When Matthew and his two unlikely companions discover Mireilles, they must embark on a journey that will change each of them forever . . . and perhaps, at long last, spark light into the dark.

On the 100th anniversary of the dedication of the Tomb of the Unknown Soldier comes an emotive tale inspired by the courageous soldiers of World War I. 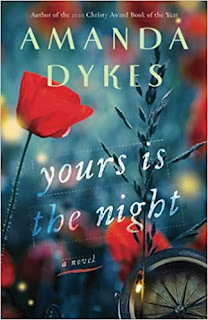 Yours is the Night by Amanda Dykes has a beautiful synopsis that made me grab this novel. I have read the first two books by Dykes and enjoyed the writing style and the story. I have not read many novels that feature around the horror of World War I, but I have read plenty of novels that feature the nightmares circling World War II. This novel sounded interesting, and I know Dykes would do a wonderful job with it. Her writing is nicely done. I could see the mud drenches trenches that the soldiers hovered around in. I could see them coming out of these trenches to fight the Germans. While Dykes has a masterful way of showing the details of the story, I had a hard time with the plot. There was nothing really interesting happening. I got bored pretty early on, and kept switching to other novels. I know it is a World War I story, but it appears it was a history textbook with boring facts. This story did not capture my attention. The characters were flat. I really did not care what they did either. I wanted this novel to be something more, but for me, it was not. If fell really short for me. I have seen some reviews where people love it. It could just be a bad time for me to read a World War I novel.

I received a complimentary copy of Yours is the Night by Amanda Dykes from Bethany House Publishing, but the opinions stated are all my own.

Purchase Yours is the Night

Email ThisBlogThis!Share to TwitterShare to FacebookShare to Pinterest
Labels: Amanda Dykes, Bethany House Publishers, Kelly Bridgewater, Yours is the Night