In 1964, a group of scientists called the Los Alamos Five came close to finishing a nuclear energy project for the United States government when they were abruptly disbanded. Now the granddaughter of one of those five scientists, aerospace engineer Elinor Mitchell, discovers that she has highly sensitive information on the project in her possession--and a target on her back.

SNAP agent and former Navy cryptologist Kekoa Young is tasked with monitoring Elinor. This is both convenient since she's his neighbor in Washington, DC, and decidedly inconvenient because . . . well, he kind of likes her.

As Elinor follows the clues her grandfather left behind to a top-secret nuclear project, Kekoa has no choice but to step in. When Elinor learns he has been spying on her, she's crushed. But with danger closing in on all sides, she'll have to trust him to ensure her discoveries stay out of enemy hands.

Natalie Walters sucks you into the global race for space domination in this perfectly paced second installment of her SNAP Agency romantic suspense series. 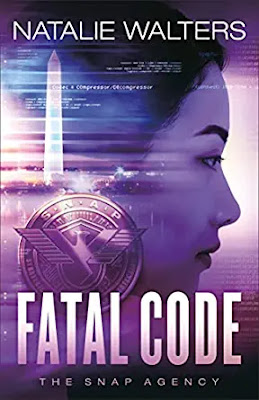 Fatal Code by Natalie Walters is a nasty treat of a hunt for a cyber code that is left by the heroine’s now deceased grandfather. Because of this, Elinor, the heroine, is focused on her science project, Van Gogh, but someone keeps attacking her asking her to release the code. Of course, she has no idea what they are talking about. From then on, the story features numerous attempts on her life, but enters the handsome Kekoa, her neighbor, who jumps into her protect and see what the real threat is all about. The story is unpredictable and original while still carry moments of familiarity to readers of the romantic suspense genre. The romance is also pretty normal for this genre. Sparks and emotions start to fly as Kekoa has to observe Elinor. My favorite part is near the beginning when Walters has the SNAP team sitting in a conference room, and they are teasing one another. The familiarity and joyful talking between the team members is a nice touch. I enjoy seeing this side of these trained soldiers. Overall, Fatal Code by Natalie Walters is an enjoyable way to spend a day. I would highly recommend fans of romantic suspense to pick up this novel and any of her other books. You won’t be disappointed.

I received a complimentary copy Fatal Code by Natalie Walters from Revell Publishing, but the opinions stated are all my own.