Elizabeth Camden: Written on the Wind

He carries a dangerous secret, but can he survive long enough to expose it?

Count Dimitri Sokolov has been charged with overseeing construction of the legendary Trans-Siberian Railway, but during this work, he witnesses an appalling crime, the truth of which threatens the Russian monarchy. In an effort to silence him, the czar has stripped Dimitri of his title, his lands, and his freedom . . . but Dimitri has one asset the czar knows nothing about: his deep and abiding friendship with Natalia Blackstone.

Natalia is the lead analyst for her father's New York banking empire and manages their investment in the Trans-Siberian Railway. Her bond with Dimitri has flourished despite the miles between them, but when Dimitri goes unexpectedly missing, she sets the wheels in motion to find him. Once they join forces, they embark on a dangerous quest in which one wrong move could destroy them both.

From the steppes of Russia to the corridors of power in Washington, Dimitri and Natalia will fight against all odds to save the railroad while exposing the truth. Can their newfound love survive the ordeal? 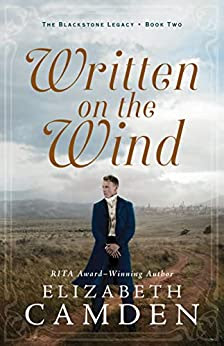 Written on the Wind by Elizabeth Camden introduces readers to the Trans-Siberian Railway in Russia in the later stages of the building. While the story does not actually focus on the building of the railway, it does involve the people who were active in a horrible situation that occurred because of the building of this massive structure. If readers are familiar with the first novel in the Blackstone Legacy, Carved in Stone, then the readers would be familiar with the name of Natalia, the heroine. This time around, it is her story that readers are allowed to follow. The romance between Natalia and Dimitri is what starts the story through telegrams from Russia to New York City. There are moments of survival through the Russian wilderness through the early winter. There are moments of high society in New York City. There are moments of life on a farm in Russia. Plenty of scenery to capture a readers’ attention. The plot tickled my interest, giving readers an interesting plot centered around the Blackstone Family. Overall, Written on the Wind by Elizabeth Camden is an interesting peek into the world of the banking system and Russian politics. A delightful novel.

I received a complimentary copy Written on the Wind by Elizabeth Camden from Bethany House Publishing, but the opinions stated are all my own.

Purchase Written on the Wind