Gabrielle Meyer: When the Day Comes

How will she choose, knowing all she must sacrifice?

Libby has been given a powerful gift: to live one life in 1774 Colonial Williamsburg and the other in 1914 Gilded Age New York City. When she falls asleep in one life, she wakes up in the other. While she's the same person at her core in both times, she's leading two vastly different lives.

In Colonial Williamsburg, Libby is a public printer for the House of Burgesses and the Royal Governor, trying to provide for her family and support the Patriot cause. The man she loves, Henry Montgomery, has his own secrets. As the revolution draws near, both their lives--and any hope of love--are put in jeopardy.

Libby's life in 1914 New York is filled with wealth, drawing room conversations, and bachelors. But the only work she cares about--women's suffrage--is discouraged, and her mother is intent on marrying her off to an English marquess. The growing talk of war in Europe only complicates matters.

But Libby knows she's not destined to live two lives forever. On her twenty-first birthday, she must choose one path and forfeit the other--but how can she choose when she has so much to lose in each life? 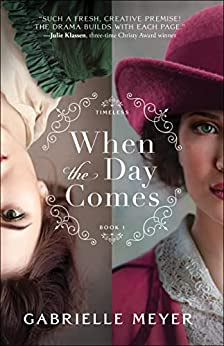 When the Time Comes by Gabrielle Meyer is a trip through history. From the American Revolution to the start of World War I, readers are taken on a trip with Libby as she navigates her way through these time periods. The plot idea of being a time crosser appears to be a different take on a storyline. The Circle series by Ted Dekker started with the same idea where the character falls asleep and wakes up in a different world in his instance. Then both main characters had to choose where they wanted to stay. I enjoyed Dekker’s series, and I have enjoyed Meyer’s take on the concept too. Meyer does a wonderful job at diving deep into the character’s psyche and allowing the readers to empathize with her plight as she figures out what timeline she wants to call her home. Plenty of dilemma in the historical aspects too. Readers will see familiar names in history as they prepare for the American Revolution. Of course, what is a historical romance without the romance. While both time periods featured a romance story, the 1774 time series was more a romantic romance story and the 1914 time series was a force romance. Readers will be thrilled to learn about the twist at the end of the story that ties the story all together. Overall, When the Time Comes by Gabrielle Meyer is a captivating story filled with a deeply developed character with pain and conflict. After reading this story, I am curious of what book two in this series will be about.

I received a complimentary copy When the Day Comes by Gabrielle Meyer from Bethany House Publishing, but the opinions stated are all my own.

Purchase When the Day Comes