Can Promises Made in Times of Struggle Endure 200 Years?

Visit historic American landmarks through the Doors to the Past series. History and today collide in stories full of mystery, intrigue, faith, and romance.

Young, spirited Josie Wilkins life is about to take a turn when faced with political turmoil and forbidden love in San Antonio of 1836. John Gilbert has won her heart, despite being a Protestant preacher who is forbidden to practice his faith in Texas. Will either of them survive an epic battle for liberty to create a legacy of love?

Nearly 200 years later, Kayleigh Hernandez takes breaks from her demanding job as a refugee coordinator working with Mexican migrants to attend flea markets where she has found a uniquely engraved ring. Enlisting the help of appraiser Brandon Shuman, they piece together a love story long forgotten. But will dangers linked to Kayleigh’s work end her own hopes for leaving a legacy built on hope, faith, and love? 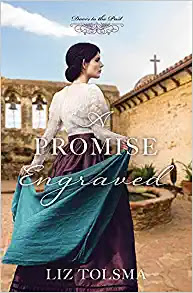 A Promise Engraved by Liz Tolsma invites readers into the story of the Battle of Alamo. With plenty of battle scenes and the rush through the Texan landscape, Tolsma invites her readers into a different world than the current Texan landscape. Josie Wilkins, the heroine from the past, is a brave woman who has a horrible past that she is trying to forget, yet cling onto certain aspects too. The present heroine, Kayleigh, also wants to know some truth about her biological parents. As both women seek to figure out the truth, they learn more about themselves and their past. Tolsma shows how understanding one’s legacy and ancestors is important to everyone. Similarly, the plot of the story was okay. As a reader, I had a hard time personally wanting to stay with the story. At times, it was boring and not a lot of movement on the page. I wanted, personally,  a bigger mystery to dive into. Overall, A Promise Engraved does fit well into the Doors into the Past series, and I believe readers will enjoy the novel as part of the complete series.

I received a complimentary copy of A Promise Engraved by Liz Tolsma  from Barbour  Publishing, but the opinions stated are all my own.

Email ThisBlogThis!Share to TwitterShare to FacebookShare to Pinterest
Labels: A Promise Engraved, Barbour Publishing, Doors to the Past, Kelly Bridgewater, Liz Tolsma