Pilot Dodge Kingston has always been the heir to Sky King Ranch. But after a terrible family fight, he left to become a pararescue jumper. A decade later, he's headed home to the destiny that awaits him.  That's not all that's waiting for Dodge. His childhood best friend and former flame, Echo Yazzie, is a true Alaskan--a homesteader, dogsledder, and research guide for the DNR. Most of all, she's living a life Dodge knows could get her killed. One of these days she's going to get lost in the woods again, and his worst fear is that he won't be there to find her.   When one of Echo's fellow researchers goes missing, Echo sets out to find her, despite a blizzard, a rogue grizzly haunting the woods, and the biting cold. Plus, there's more than just the regular dangers of the Alaskan forests stalking her . . . Will Dodge be able to find her in time? And if he does, is there still room for him in her heart? 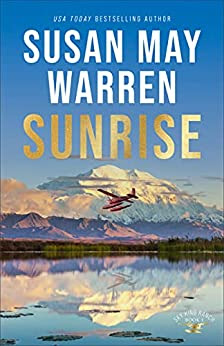 Sunrise by Susan May Warren travels to Alaska for a bear adventure through the wilderness. With the start of Warren's Montana Rescue series, she loves to travel to outlanding destinations and allow her heroines and heroes to fight the elements mixed with their fight for their hearts. In Sunrise, readers are introduced to Dodge, the oldest of the triplets born under the Sky Range Ranch. Readers also are introduced to Echo, his love who denied him his happily-ever-after. The plot definitely has plenty of action through the wilderness with the snow and bears fighting for the overwhelming plot twist. I had no problem flipping through the pages of the story, wanting more. The romance leaps forward with hints of what happened in the past. Understanding sparks through the pages of the story. Warren does  wonderful job at crafting a wilderness that I wanted to travel to and venture around. Overall, Sunrise by Susan May Warren is wonderful story that takes place in Alaska and allows readers to fully engage in the story. I can't wait to read more stories in this series.

I received a complimentary copy of Sunrise by Susan May Warren from Revell Publishing, but the opinions stated are all my own.