Stephanie Landsem: In a Far Off Land

A story about the price of fame, the truth sacrificed on its altar, and the love that brings a prodigal daughter home.
As the Great Depression hits the Midwest, Minerva Sinclaire runs away to Hollywood, determined to make it big and save the family farm. But beauty and moxie don’t pay the bills in Tinseltown, and she’s caught in a downward spiral of poverty, desperation, and compromise. Finally, she’s about to sign with a major studio and make up for it all. Instead, she wakes up next to a dead film star and is on the run for a murder she didn’t commit.

Only two unwilling men—Oscar, a Mexican gardener in danger of deportation, and Max, a too-handsome agent battling his own demons—can help Mina escape corrupt police on the take and the studio big shots trying to frame her. But even her quick thinking and grit can't protect her from herself. Alone, penniless, and carrying a shameful secret, Mina faces the consequences of the heartbreaking choices that brought her to ruin . . . and just might bring her back to where she belongs. 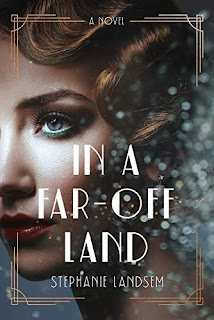 In a Far-Off Land by Stephanie Landsem  is a prodigal daughter and the trials she has to face while she roams to Hollywood during the 1930's. First a word of warning, there is hints of lots of drinking and intimate relationships between Minerva and many men, so I would be a little nervous at allowing a young lady reading this story. Not that Landsem actually shows what happens, but she does have moments that are close to the action and leading up to it that might be not suitable for younger ladies. Other than this, the story was realistic and haunting. Of course, it was not hard to draw the connections between this story and the Prodigal story in the Bible. The story was well-written and definitely captures my attention. I loved reading about this time period, and it was a unique twist on the Gilded age storyline. It was nicely done. Overall, In a Far-Off Land by Stephanie Landsem is a gritty, realistic view of the underbelly of the 1930's Hollywood.

I received a complimentary copy of In a Far-Off Land by Stephanie Landsem from Tyndale Publishing, but the opinions stated are all my own.

Purchase In a Far-Off Land