To live an unforgettable life, she would defy all expectations—including her own.

Ever since she was a child, Audrey wanted her life to be extraordinary. But as the daughter of a viscount born in late fourteenth-century England, the only thing expected of her was to marry—until an act of malice by her sister, Maris, four years ago damaged her prospects even further. Though Maris was sent away, twenty-year-old Audrey is still suffering the scars of her sister’s cruelty. So when her father announces his plans to marry off his damaged daughter and bring Maris back home, Audrey decides to flee in search of her true destiny.

However, life outside her home is dangerous, and she soon finds herself attacked, sick, and in dire straits. She is taken in at Dericott Castle to be nursed back to health. While there, she decides to keep her identity a secret and work as a servant in the castle. But she doesn’t count on falling in love with the young and handsome Lord Dericott, who lost his arm several months earlier and bears scars of his own.

Meanwhile, Edwin—Lord Dericott—is curious about the new, well-educated servant’s identity. When the man Audrey’s father wanted her to marry comes looking for her, each must make a life-changing decision about what to believe and whether or not love is truly worth trusting. 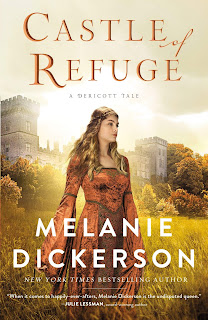 Castle of Refuge by Melanie Dickerson is exactly what the title suggests. The heroine, Audrey, runs away from home afraid for her life and ends up at the Dericott's castle. I loved Dickerson's fairy tale remakes, and this story is no different. I love the fourteenth-century England setting. I love the castle. I love the way majority of Dickerson's heroes show their love for the heroine. They are slow at showcasing their love and willing to do things they normally would not do to please the heroine. Edwin, the hero, in this story, is no different. He even seeks out the advice of one of his staff members on how to capture Audrey's interest. Then later, readers are invited to watch them interact this way. While the plot has some conflict, it felt right in the story. Overall, Castle of Refuge is a masterfully, written story for fans of medieval literature and romance stories.

I received a complimentary copy of Castle of Refuge by Melanie Dickerson from Thomas Nelson Publishing, but the opinions stated are all my own.