First he left the CIA. Then he left pastoral ministry. Now John Cross has been imprisoned in one of Great Britain's most infamous prisons. Has he reached the end of his rope? Or is this another move in a dangerous spy game?

Christine Lewis, United News Network's rising star television anchor, is determined to find out. But in her pursuit of answers, Christine finds herself at the center of a cyberterrorist plot to alter the balance of power in the world. From the English coastline to the Rocky Mountains, John must partner with the CIA and MI6 in a race against the clock to stop the threat of nuclear war and save the lives of everyone he holds dear.

The concluding story in the Shepherd Suspense trilogy is a globe-trotting, action-packed adventure with threads of biblical truth woven in. Fans of high-octane thrillers will be on the edge of their seats with Right Cross. 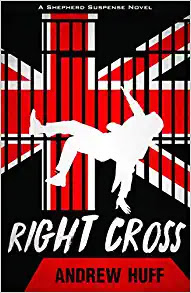 Right Cross is a military guy with a straight shot who turned pastor as he chases bad guys and try to rescue the woman he slowly fell in love with. From the first chapter, readers are taken on a ride as John Cross rushes through and over danger. This time, the story starts in a prison and appears that John Cross has turned to the dark side. There is prison fights, riots, and an escape. This leads to Christine and John reuniting with each other and testing their budding relationship. I love the Lori character. She is a fabulous sounding board. She is the religious voice of reason and sarcastic too. Reminds me of my aunt who passed away in 2015. The rest of the story is a thriller with a threat to America’s National Security. Bullets flying. Bodies dropping. Helicopters through the mountains. The story definitely has the chase with tons of action feel. BUT it was an okay novel, not one of my favorite stories. I have read the first one but not had the opportunity to read Cross Shadow currently. I believe fans of James R. Hannibal might enjoy this novel too.

I received a complimentary copy of  Right Cross from Kregel Publishing , but the opinions stated are all my own. 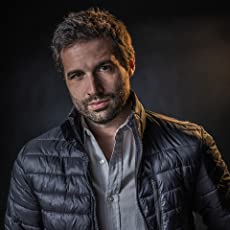 Andrew Huff is the author of the action-packed Shepherd Suspense Series from Kregel Publications. The first book in the series, A Cross to Kill, was a finalist in the Mystery/Thriller categories of both the 2020 Foreword INDIE awards as well as the 2020 ACFW Carol Awards. Huff is an accomplished novelist as well as screenwriter and has worked in the church media and entertainment industry after spending 10 years as a leader in local church ministry. He currently calls North Texas home where he and his beautiful wife Jae raise their two boys and rescue dog. (Taken from Amazon.)
Posted by Kelly Bridgewater at 2:00 AM