Once London's top thief, Barclay Pearce has turned his back on his life of crime and now uses his skills for a nation at war. But not until he rescues a clockmaker's daughter from a mugging does he begin to wonder what his future might hold.

Evelina Manning has constantly fought for independence, but she certainly never meant for it to inspire her fiancé to end the engagement and enlist in the army. When the intriguing man who saved her returns to the Manning residence to study clockwork repair with her father, she can't help being interested. But she soon learns that nothing with Barclay Pearce is as simple as it seems.

As 1915 England plunges ever deeper into war, the work of an ingenious clockmaker may give England an unbeatable military edge--and Germany realizes it as well. Evelina's father soon finds his whole family in danger--and it may just take a reformed thief to steal the time they need to escape.

I really enjoyed spending time with Roseanna M. White's family of thieves. An Hour Unspent is a wonderful addition to the series. I have read all three books in this series and have enjoyed them all. London is one of my favorite settings, so I couldn't wait to dive into another book in that setting. Plus, I really couldn't wait to see Barclay's story and why he became a thief. White does a marvelous job at inviting me into the historical world and allowing me to be swept up into the story.

I love how White brought the world of the early twentieth century to life for me. I didn't have a hard time imagining the setting from the clock tower to the watch shop. I love Barclay's family. All of the orphans struck a chord in me. I remember reading books by Charles Dickens and learning about all the horrible conditions of the work houses and the orphanages during earlier times. I'm glad the children did not have to endure such horrible surroundings.

The plot moved quickly and captured my interest. Of course, the romantic ending was predictable, but I still enjoyed watching Barclay and Evelina as they fell in love and learned how to move through their worlds together. I enjoyed learning more about the Rolex's and the world of watch making. It was interesting and taught me something new.

With An Hour Unspent, I finally got to see Barclay's story and see the humble and adoring heart he carries for the troubled orphans in London. He definitely has the heart of a true hero. I really enjoyed him and the transformation he endured from the first book.

Overall, An Hour Unspent by Roseanna M. White is a fascinating tale of a family of thieves. I loved the concept of a family, which doesn't have to be by blood. I loved the ability to be swept up into London and watch these old thieves change for the better. I really enjoyed White's writing style, and I eagerly await what else she plans to write. Fans of Rachel McMillan, Julie Lessman, and Lorna Seilstad would, I believe, enjoy this series.

I received a complimentary copy of An Hour Unspent by Roseanna M. White from Bethany House Publishers, but the opinions stated are all my own.

You can purchase the book here.

Roseanna M. White is a bestselling, Christy Award nominated author who has long claimed that words are the air she breathes. When not writing fiction, she's homeschooling her two kids, editing, designing book covers, and pretending her house will clean itself. Roseanna is the author of a slew of historical novels that span several continents and thousands of years. Spies and war and mayhem always seem to find their way into her books...to offset her real life, which is blessedly ordinary. You can learn more about her and her stories at www.RoseannaMWhite.com. (Taken from Amazon.) 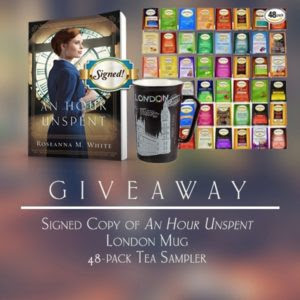 To celebrate her tour, Roseanna is giving away a grand prize of a signed book, a London mug, and a 48-pack Twinings tea sampler!!
Be sure to comment on the blog stops for nine extra entries into the giveaway! Click the link below to enter. https://promosimple.com/ps/d570/an-hour-unspent-celebration-tour-giveaway

Posted by Kelly Bridgewater at 12:00 AM