“The One Rule Is, Don’t Mess With The Past”But he did, and now ex-detective Rembrandt Stone is reaping the devastation of ignoring those words when he traveled back in time to solve the one case that had haunted his dreams.Yes, he solved the crime. Yes, he saved lives. But Rembrandt returns to find the unthinkable has happened and his life has shattered.There’s only one answer: break the rule again. Go back in time once more, fix what went wrong, save what went right, and yeah, in his spare time solve another brutal crime.But it’s not so easy to change time, especially when time turns you into a target. And of course there’s the strong possibility if he goes again, he’ll never get back. 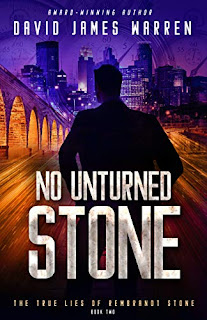 No Stone Unturned by David James Warren was better written and a little more normal if readers had read the first story, Cast the First Stone. In this addition, Stone goes back in time to try to stop a serial killer because in the "normal" world this dilemma, once again, affects his future. I enjoy stories with serial killers because for the most part, there is going to be tons of bodies and intrigue and clues that keeps the plotting moving and guessing. But in No Stone Unturned that is not the case. The story does show the first victim, and Stone does solve the mystery of what happened to this person, but is this person the serial killer later? I'm not sure. Warren left it up in the air. Warren does share what happens to the killer later in the story, but what happens later? That is the true question. I wanted more attention focused on the mystery instead it was Stone trying to woo his wife over and over again and stopping things that would hurt her in the future. Not that I don't like this book. Trust  me. Warren's writing always captures my attention, and I have hard time putting the novels down. Overall, No Stone Unturned by David James Warren is filled with intrigue and a hint of suspense. An interesting way to spend the day and forget about the lockdown.

I received a complimentary copy of No Stone Unturned by David James Warren through JustRead Tours, but the opinions stated are all my own.