Her carefully crafted life is about to be demolished.

After a difficult childhood, Samantha Williams craves simplicity: jigsaw puzzles, lectures at the library, and the students she adores in her role as an elementary art teacher in the dusty farming community of LaCrosse, Washington.

But when an SUV crashes into the school where she teaches, her entire world is upended. She manages to keep all of the children safe, but her car isn’t so lucky. Oddly, her purse—containing her driver’s license, credit cards, and other identification—is missing from the wreckage.

After authorities discover that the driver in the school accident was shot seconds before the crash, Samantha quickly becomes entangled in increasingly strange events that have her looking over her shoulder.

Samantha has long tried to forget the tragedy of her past, but the twisting maze she discovers between the murdered driver, a deadly secret government project, and an abandoned town can't be ignored. Those involved are determined to keep these secrets buried, and they’ll use any means necessary to stop Samantha’s search for truth. 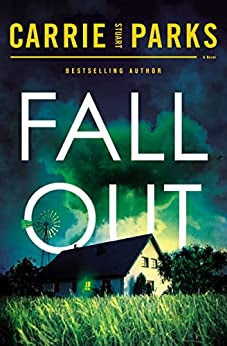 Fallout by Carrie Stuart Parks is a trip through a past chemical warfare issue, which could be disastrous for the current day. The plot was interesting and captivating. I had a really hard time putting the novel down. The heroine, Samantha, has to learn more about her past and put the puzzle pieces together to figure out why someone wants to kill her. Similarly, Dutch, the hero, has to also come to reality about the weight of the pass that he keeps carrying around. Samantha is the deeper character who Parks dives into and allows readers to emphasize with. The plot focuses mostly on the suspense, which I highly favor. Near the end of the story, the heroine and hero have a romantic moment that I really did not like. Nothing in the story really led up to them having feelings for each other. The story would have been better to end the story with a spark of an emotion, not trying to develop a relationship. Even with this tiny issue, Fallout by Carrie Stuart Parks was a delightful suspense novel with a twist to the ending that kept me engrossed in the plot. Definitely will want a copy for my shelf.

I received a complimentary copy of Fallout by Carrie Stuart Parks  from Thomas Nelson Publishing, but the opinions stated are all my own.