In 1917, Alma Pihl, a master craftsman in the House of Fabergé, was charged to protect one of the greatest secrets in Russian history--an unknown Fabergé Egg that Peter Karl Fabergé secretly created to honor his divided allegiance to both the people of Russia and the Imperial tsar's family. When Alma and her husband escaped Russia for their native Finland in 1921, she took the secret with her, guarding her past connection to the Romanov family.  Three generations later, world-renowned treasure hunter Nick Laine is sick and fears the secret of the missing egg will die with him. With time running out, he entrusts the mission of retrieving the egg to his estranged daughter, Ava, who has little idea of the dangers she is about to face. As the stakes are raised, Ava is forced to declare her own allegiance--and the consequences are greater than she could have imagined. This modern-day treasure hunt from award-winning author Kelli Stuart transports you into the opulent and treacherous world of the Russian Revolution to unearth mysteries long buried. 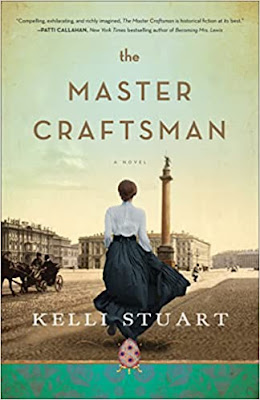 The Master Craftsman by Kelli Stuart is a treasure hunt race to hunt for the Russian Eggs. During the early 20th century, master craftsman would take jewelry and craft these outlandish Easter eggs that opened and had little secret gifts inside. I really do not know much about Russian history, so this was a fascinating concept. I loved how Stuart promised within the first chapter to deliver a treasure hunt in her story and delivered. The entire novel focused on the hunt for the missing egg. The story takes place in Petersburg, Russia to Finland and in America. The plot was well-crafted, and I could not wait to see what happened. Definetly a page turner. There is a twist at the end that I did not see coming, which was really nice. Overall, The Master Craftsman by Kelli Stuart is a unique exploration into the Russian eggs while showing the audience about Russian history. I recommend this novel for fans who enjoy history with a little mystery.

I received a complimentary copy of The Master Craftsman by Kelli Stuart from Revell Publishing, but the opinions stated are all my own.