Former Navy SEAL Jedidiah Johnson returns to Nashville ready to begin his training with the elite warriors known as the Shepherds. He thinks he knows what to expect when he arrives on the sprawling, state-of-the-art facility but quickly realizes he’ll have to find his place as the rookie leader of a new team. Then he starts having visions of an imminent attack overseas, and with the clock ticking, Jed and his team are dispatched to neutralize the threat. All the while, Jed hears whispers of another threat . . . a name that raises unexplained fear and anger throughout the Shepherds organization.

Once a military man, Nicholas Woland betrayed the Shepherds and all they stood for when he joined their enemies. After years in prison, Woland is eager to get back in action spreading chaos and death. And he has been freed for a purpose: a sinister plot that will result in hundreds of casualties and incite worldwide religious warfare for years to come.

As Woland and the Shepherds race toward a collision, Jed must rely on his gifts, his training, and his untested team to make critical decisions on a global stage—never realizing that a secret servant of the enemy is growing closer and closer to him. 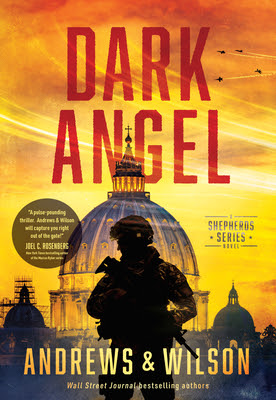 Dark Angel by Brian Andrews continues the story of the Shephards. All of the characters are ex-military that have been in service, but they serve the Lord and now want to fight the dark forces aka demons that are running rampant in the world. The plot was a little slow in the first part as the story takes place in the training world of the Shephards. It was interesting to see how they are trained to prepare to face the dark angels, but it did take a long part of the story. Once they were called up, the story started to take off and create a little more tension. The part of the story where the dark angel, who is creating the havoc, is allowed to show his past story and emotions is some of my favorite parts of the story. Part III is a nicely handled section full with a number of high-octane moments with plenty of action. Overall, Dark Angel by Brian Andrews is full of action, just like I enjoy my stories, in the second and third parts. If readers enjoy suspense books like Joel Rosenberg with a hint of hope from God, then this might be the book for them to read.

I received a complimentary copy of Dark Angel by Brian Andrews from Tyndale Publishing, but the opinions stated are all my own.

Posted by Kelly Bridgewater at 1:30 AM