Andrea Christiansen: Hangin' by a Moment

He just wants to erase his past.

The day Jack—formerly Winston Stewart—walked out of jail, he vowed to keep his conviction a secret. After all, it wasn’t like he’d committed a murder. Just a terrible mistake, and he did his time. Now he wants a new life in a sleepy town where no one knows his name. Deep Haven is the perfect place to start over as a chef. The last thing the former pararescue jumper wants is to get involved. But when Boone Buckam—his friend and the one guy he owes for getting him out of the slammer—asks for help, how can Jack refuse?

She can’t seem to escape hers.

Colleen Decker has already escaped evil once—as a teenager, she was kidnapped by a murderer. But she’s put all that behind her as a trauma nurse in Minneapolis. Or maybe not, because a freak mistake in the ER sends her past crashing down on her. She needs a timeout in her hometown of Deep Haven. She doesn’t plan to stay—even when she’s roped into the job of flight nurse for the town’s Crisis Response Team chopper. Colleen’s not sure why she’s drawn to danger, but she’ll be safe enough. After all, she’ll need training, and her teacher is a handsome former pararescue jumper. What could go wrong?

But facing the past might put their future together in jeopardy.

When Jack said he didn’t want to get involved, he especially meant his heart—but being with Colleen feels like a fresh start. He’ll even climb aboard a chopper again, despite his vows. They’re headed for a happy ending…
But secrets never stay buried in a small town. And when disaster strikes one snowy night, they’ll both have to decide if the past will destroy them…or if it just might lead them home. 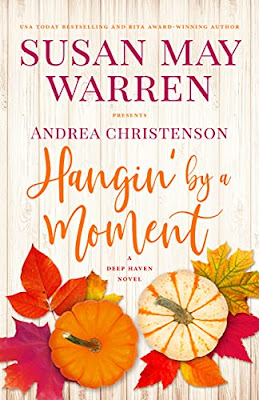 Hangin' By a Moment by Andrea Christiansen is a delightful contemporary romance story filled with heart and humor. I enjoy stories that show characters who are on a redemptive journey. Especially when they see themselves as one way and by the end of the story, they come to realize the way that God sees them or the way that they should have disproved the lies about themselves. Christiansen starts with an ex-con who has to overcome his dark fears and his past. His journey is quite memberable. With all the description of burgers in the story, I kept wanting to eat one after finishing this novel. Colleen, our heroine, has been featured in the Deep Haven stories. This time, she has grown up and is trying to overcome her own fears and worries from a stressful moment. The plot was well-written and kept my attention. I believe if fans enjoy contemporary romance, then Hangin' By a Moment will be right up their alley. I can't wait for another Deep Haven novel.

I received a complimentary copy of Hangin' by a Moment by Andrea Christiansen, but the opinions stated are all my own.

Purchase Hangin' by a Moment