Amy Lynn Green: The Lines Between Us

A WWII novel of courage and conviction, based on the true experience of the men who fought fires as conscientious objectors and the women who fought prejudice to serve in the Women's Army Corps.

Since the attack on Pearl Harbor, Gordon Hooper and his buddy Jack Armitage have stuck to their values as conscientious objectors. Much to their families' and country's chagrin, they volunteer as smokejumpers rather than enlisting, parachuting into and extinguishing raging wildfires in Oregon. But the number of winter blazes they're called to seems suspiciously high, and when an accident leaves Jack badly injured, Gordon realizes the facts don't add up.

A member of the Women's Army Corps, Dorie Armitage has long been ashamed of her brother's pacifism, but she's shocked by news of his accident. Determined to find out why he was harmed, she arrives at the national forest under the guise of conducting an army report . . . and finds herself forced to work with Gordon. He believes it's wrong to lie; she's willing to do whatever it takes for justice to be done. As they search for clues, Gordon and Dorie must wrestle with their convictions about war and peace and decide what to do with the troubling secrets they discover. 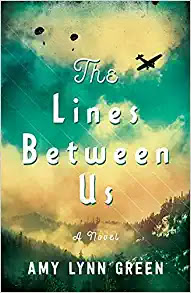 The Lines Between Us by Amy Green starts like her previous novels with the letters. But much to my enjoyment, the entire novel is not a complete letter writing. It is actually a normal written novel with some letters thrown in. Green crafted a World War II novel set in the state of Oregon with smokejumpers and some army personal thrown in for good measure. While the story does not showcase the horrors that was happening in Europe during this time, the story does feature a softer side to the stateside war effort. The writing was vivid and descriptive. I did learn more about what was occurring in America versus the horror that most World War II novels focus on. It was a nice change in the plot idea. There really is no romance in the novel. If that is what you are looking for, then this is not part of the plot. As for the plot, it was different, unique, and unknown, which is a wonderful idea, BUT the plot tried to be a mystery. Yes, there was the hunting for clues. There was mysterious actions and people around. There was a big climactic moment near the end of the novel. The story ends with the framing of the letters. The novel was nicely delivered, but not enough action for me. Overall, The Lines Between Us by Amy Green is a unique and different story occurring during the World War II.

I received a complimentary copy of  The Lines Between Us  by Amy Lynn Green  from Bethany House Publishing, but the opinions stated are all my own.

Purchase The Lines Between Us