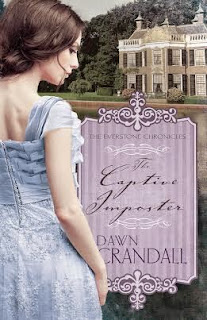 Sent away for protection, hotel heiress Estella Everstone finds herself living undercover as a lady’s companion named Elle Stoneburner at one of her father’s opulent hotels in the mountains of Maine—the one she'd always loved best and always hoped to own one day, Everston. The one thing she doesn't like about the situation is that her ex-fiancé is in the area and is set on marrying someone else. Reeling from her feelings of being unwanted and unworthy, Estella reluctantly forms a friendship with the gruff manager of Everston, Dexter Blakeley, who seems to have something against wealthy young socialites with too much money, although they are just the kind of people Everston caters to.

When Estella finds herself in need of help, Dexter comes to the rescue with an offer she can't refuse. She sees no other choice aside from going back home to her family and accepts the position as companion to his sister. Throughout her interactions with Dexter, she can't deny the pull that's evidenced between them every time he comes near. Estella realizes that while she's been hiding behind a false name and identity, she’s never been freer to be herself than when she's with Dexter Blakeley. But will he still love her when he finds out she's Estella Everstone? She's not entirely sure.

The Captive Imposter is the third book in Dawn Crandall’s Everstone Chronicles. I have read and reviewed the first two books in the series: The Hesitant Heiress and The Bound Heart. Click on each individual book title to read my complete reviews on the specific books. I enjoy stories where characters have to struggle and work their way through dilemmas in order to end up together. A sort of redemptive quality to the hero and heroine.

Crandall does a good job at mirroring the love of God in the relationships of her characters. For instance, in the hero, Dexter Blakeley, Crandall created a loving, caring, protective, and trust-worthy man who does not flirt and give his heart away. Dexter takes the time to be careful at guarding Elle’s heart. On the other hand, Elle Stoneburner aka Estella Everstone, is a patient, meek woman who wants to be loved. Even through all the struggles Dexter and Elle face, Dexter and Elle love each other for who they really are. Just like God loves us for who we really are.

The setting of the story in 1891 Maine captured my interest. Crandall does a good job at describing the setting of the woods, mountains, spring, and the hotel to situate her readers in the story. I felt like I was roaming the woods with Elle or climbing on the cement wall around the spring.

The writing is fluid with a balance between the prose and dialogue. I believed I followed Elle through her story, learning and empathizing with her as she struggled with sharing her true identity to Dexter. The story is told in first person, so the readers experience the story from Elle’s perspective. The romantic tension was spot on. I truly felt Elle’s dilemma as she started to fall for Dexter and fought internally how to break her secret with him. Crandall is great at creating realistic characters who stay with you long after the story is done.

Fans of Julie Klassen and Jane Austen will love the story and the romance between Dexter and Elle. I recommend everyone read the first two books in the story since there are moments in the third book that allude to incidents in the previous stories.

A swoon-worthy romance from a hero and heroine that will tug at the reader's heart with a captivating setting to spark love and the keys to finding one's true identity.

I have received an ARC from Dawn Crandall for The Captive Imposter in exchange for an honest review. All opinions are my own.

A graduate of Taylor University with a degree in Christian Education, and a former bookseller at Barnes & Noble, Dawn Crandall didn't begin writing until her husband found out about her long-buried dream of writing a book. Without a doubt about someday becoming traditionally published, he encouraged her to quit her job in 2010 in order to focus on writing her debut novel, The Hesitant Heiress. It didn't take her long to realize that writing books was what she was made to do. Dawn is represented by Joyce Hart of Hartline Literary.

Apart from writing books, Dawn is also a first-time mom to a precious little boy (born March 2014) and also serves with her husband in a pre-marriage mentor program at their local church in Northeast Indiana.
Dawn is a member of Romance Writers of America, American Christian Fiction Writers, secretary for the Indiana ACFW Chapter (Hoosier Ink), and associate member of the Great Lakes ACFW Chapter.

The Everstone Chronicles is Dawn's first series with Whitaker House. All three books composing the series were semifinalists in ACFW's prestigious Genesis Writing Contest, the third book going on to become a finalist in 2013.

Where to buy her books:
Amazon
Barnes and Nobles
Kobo

What is your favorite thing about historical romance?
Posted by Kelly Bridgewater at 5:00 AM