Her memories are blocked. Her freedom is gone. Her crime is a mystery.
When Ming Dalamani awakens from twenty years of suspended animation, she recalls only fragments of her former life: the life she led before she was arrested by the governing interplanetary corporation, Renasco, for a now unremembered crime.
Relocated to an alien world far from the only home she has ever known, Ming serves a powerful Renasco representative to repay her debt. But daily she lives with deadly threats from two men—the hideous mutant Zardir Huekk and the handsome, secretive musician Tieg Innig—who both want the same thing: information. Renasco-trained as a calligrapher in three dimensions, Ming begins to remember more: a clan, a mission, and interstellar piracy.
Ming must decide where her loyalties lie: with her powerful new employer, with a budding resistance movement... or elsewhere.
My Thoughts:

While I enjoy the Star Wars series, I'm not a huge fan of science fiction, but Crystal Witness by Kathy Tyers sounded interesting, so I offered to give her a chance. Tyers does a wonderful job diving into the characters and making their internal dilemmas come to life. But I problem was with the pacing of the plot, it started out with what could have been a wonderful moment, then she throws us into a story that doesn't appear to have anything to do with what we just read. So as I followed the story, I kept being confused, maybe just like the heroine who was stuck on this new planet. Maybe that was Tyers agenda from the beginning. I don't know. The climactic moment didn't seem to wow me either. I ended the book not satisfied at all. Maybe because the genre doesn't really appeal to me could be why my rating is so low, but I tried something different, which is what we all should do.
I received a complimentary copy of Crystal Witness by Kathy Tyers by Enclave Publishing through Celebrate Lit, but the opinions stated are all my own. 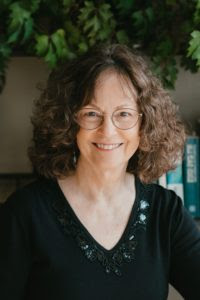 Kathy Tyers is widely published in speculative fiction, including her award-winning Firebird series and two licensed Star Wars “Legends” novels, as well as a travel book, a writing reference book, and a memoir co-written for classical guitarist Christopher Parkening. Her messiah-in-space novel Daystar, fifth in the Firebird series, won a 2013 Carol Award, and her terraforming/genetic engineering science fiction novel Shivering World won the 2019 Christy Award for Visionary Fiction. At home in southwest Montana with her husband William Gillin, Kathy focuses on writing, teaching music, and freelance editing.
More from Kathy
In 1988, after the initial release of Firebird and Fusion Fire by Bantam Books of New York, my then-editor asked for a stand-alone novel, and my then-agent presented me with a contract to write that book in just over half the time that I actually needed. So my third novel, Crystal Witness, appeared in 1989—and while the plot had strong bones, I wished I’d had several more months to polish it. Much to my delight, Enclave Publishing is re-issuing Crystal Witness in June 2020 with the layers of polishing added. While I was adding those layers, I found myself wondering what would happen next. Maybe … oh, yes … hmmm … Aha!

Now that Crystal Witness is ready to stand up and sing, I am delighted to be working on a multi-book sequel series, The Sunstone Saga, also to be released by Enclave Publishing. Book 1 of the saga, The Long Silence, is well underway. It introduces a new cast of characters and asks a powerful question: Where has God been, while humankind went to the stars?
Crystal Witness is the story of young Ming Dalamani, who wakens from twenty years of suspended animation to find herself “company property” on a distant world, with no memory of the crime she must have committed. She only knows that a powerful corporate monopoly rules interstellar space, and she has been assigned to serve a company representative. Immediately, powerful (and opposing) individuals offer threats and bribes, trying to enlist her to spy for both sides of a deadly intrigue. How long can Ming play both sides of the plot against her urgent wish to find out who she is … and what was her crime?

My background in music and the arts always manages to show up in my books. I made Ming a calligrapher in three dimensions, wielding a set of injection pens to create elegant designs in clear slabs. Another character is a court musician with futuristic technology at his fingertips. My entire family was musical; my mother played in 20thCentury Fox’s prestigious sound stage orchestra in the 1950s, and my father grew up in a family band that toured the U.S. every summer. When I was widowed in 2004 and needed to make a fresh start, I discovered that Regent College in Vancouver BC had a program in which I could study toward a Master’s degree in Christianity and the Arts—and write a science fiction novel as part of my thesis project. That book, Wind and Shadow, picked up the Firebird series at Book 4 and led to its completion in Daystar, Book 5. That series is conclusively finished—as you know, if you have read Daystar!

To celebrate her tour, Kathy is giving away the grand prize package of a still-in-box set of miniature toys that was released in 1996 to go with her novel, Star Wars: The Truce At Bakura, a signed copy of Firebird and One Mind’s Eye!!
Be sure to comment on the blog stops for nine extra entries into the giveaway! Click the link below to enter.
https://promosimple.com/ps/fcdb/crystal-witness-celebration-tour-giveaway
Posted by Kelly Bridgewater at 12:00 AM