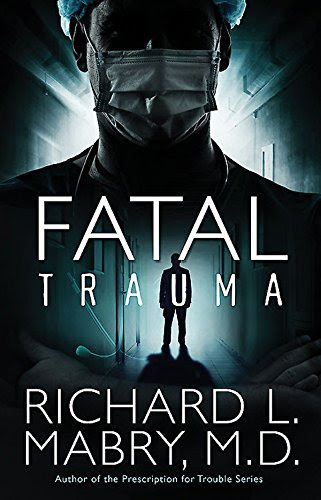 When Dr. Mark Baker and Nurse Kelly Atkinson are held at the mercy of a dangerous gunman, the lives of every emergency room patient are at stake. At the end of the evening three men are dead. One of them is a police officer who couldn't be saved despite Mark's best efforts. The other two are members of the feared Zeta drug cartel.
Though the standoff is over, the killing is not, because when the drug cartel loses its members, revenge is not far behind. Facing an adversary whose desires is dark and efforts are ruthless, Mark finds himself under suspicion as a killer, yet still a potential victim. When he turns to his high school sweetheart, attorney Gwen Woodruff, for help, Kelly helplessly looks on, as she hides her own feelings for the good doctor.
At the height of the conflict, three questions remain: Who is the shooter? Who will the next victim be? And can Mark prove his innocence before the gun turns on him?

Being a huge fan of suspense, I jumped on the chance to read Richard Marby’s Fatal Trauma. This was my first chance of reading his book. I was hoping it was the type of book along the same vein of Candace Calvert and Jordyn Redwood.

I recently read my first book by Candace Calvert, and I truly loved her book, so I am thinking that Fatal Trauma would be kind of the same type of suspense book without relying so much on the romance side like Calvert does. The conflict starts in the first chapter with a gunman in a hospital, threatening to shoot everyone who doesn’t help his brother. From that moment on the suspense kept occurring to the Mark, the hero, and Kelly, the heroine. While in most suspense books, I stayed up all night, trying to find out who was after them, but in Marby’s book, I actually got bored. Most of the suspenseful moments happened in a car. Bullets through the window, car chase, car wrapped around a tree, nothing really different occurred. I never really worried for Mark or Kelly’s safety. I was not on the edge of my seat.

As for Mark, he does change spiritually through the book, but his change did not follow the normal path of someone looking for God. He questioned and asked pastors and other believers why they believed, but it seemed simple and happened too quickly for my taste. Similarly, Kelly was undeveloped, and I really did not feel sad when bad things happened to her. I think the characters were cardboard characters moving through the hospital and the gunshots.

Even thought the characters and the plot did not ring true to a suspense book for me, the writing was great. Marby did a good job at allowing me to get inside Mark and Kelly’s head and see their struggles, fears, and thoughts. His control a showing the inner workings of a hospital is evident in her word on the page. I felt like I was roaming the halls of a local hospital, watching the action occur.

Overall, Richard Marby’s Fatal Trauma was not what I was expecting when I picked it up. The characters are plain, and the suspense is too common for the genre, begging for me to put the book down. I couldn’t wait to finish the book. It dragged on for a long time.

I received a complimentary copy of Richard Marby’s Fatal Trauma by Abington Press and the opinions stated are all my own.

How to connect with Richard Marby:

Where to purchase his books:
Amazon
Barnes and Nobles
Christianbook

What draws you into medical romantic suspense? Who are some of your favorite medical suspense authors?
Posted by Kelly Bridgewater at 5:00 AM