Review of The Bound Heart by Dawn Crandall 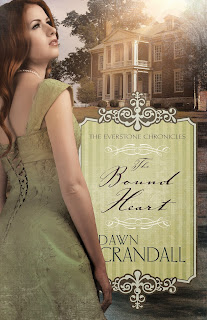 Of the two books by Dawn Crandall, The Bound Heart, was my favorite. As a heroine, Meredyth was a strong character who I enjoyed experiencing her story as she struggled with the mistake she made in her past. Making one mistake can change the way all of us have an outlook on life. Meredyth was plagued with guilt because she believed a lie. Meredyth’s emotions were so spot on that I became so swept in the story that sometimes I couldn’t believe she wasn’t right there next in me in person. Being a first person narrative, Crandall did a good job of making Meredyth a realistic hero that every reader could love.

As a hero, Lawry Hampton was a great guy who loved to take care of children in desperate need of his care. He was the type of guy who lived by his faith by founding an orphanage in Seattle. Lawry gave the children of Seattle somewhere to live, food to eat, and someone to care for them just like the Bible says in Matthew 25:40, “Inasmuch as you did it to one of the least of these My brethren, you did it to Me.” What girl wouldn’t swoon over a man who put others’ needs in front of his own desires? Lawry was a strong hero who sparked an interest in my heart.

Crandall did a good job at description of the wealthy society of 1891 Boston. I felt like I was sitting around with the rich and famous, watching their interactions with each other. Crandall does a good job of drawing her readers into the story and making them breathless as they observe their surroundings in the wealthy houses and the interworkings of their normal lives.

In February 2015, Dawn Crandall’s third and final book in the series comes out, and I am really excited to see what the next book entails. Dawn is definitely an author who will make a name for herself in the historical romance genre.

I received an ARC of The Bound Heart from Dawn Crandall in exchange for my honest opinion. All of the stated opinions are mine.
Posted by Kelly Bridgewater at 5:00 AM