Mary Weber just published her debut novel, The Storm Siren, from Thomas Nelson Publishers. It is a first in a three book series rightly entitled The Storm Siren Trilogy. This is a Young Adult Speculative fiction piece that takes place in another time.

The story features a seventeen-year-old protagonist, Nym, who is a rare Elemental because up until her existence all Elemental were males and killed at birth. Somehow she had bypassed that law and lives at seventeen. Elementals have powers to control certain aspects of the atmosphere. With the title being, The Storm Siren, you could probably guess by now, that Nym controls storms—all the lightening, clouds, thunder, and rain. 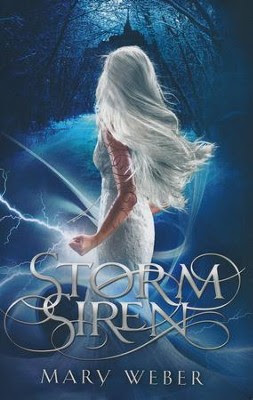 As the story opens, Nym is standing at the on a stage being bided off to slave owners. She has been through this number of times. Standing high above everyone else, Nym observes a little red head girl getting smacked around by her new owner. Anger rises from every core of her being, and Nym releases a huge storm killing everyone around her.

Adora, a wealthy woman, purchases Nym and allows her to live in her elaborate home and take lessons to control her elemental powers with Colin, another trainee, and Eogan, the trainer. Nym must decide to protect war-ravaged Faelen or be killed. Of course, she chooses to train. Over a course of five weeks, Nym learns how to control her powers.

The book may be designed for young adult, but I truly enjoyed the story. The character, Nym, is a character that most people can empathize with. She doesn’t feel like she belongs in her world, and no one would understand her. I truly wanted to see her succeed and throw away the bonds of slavery that wrapped around her wrists a number of times. Both metaphorically and realistically.

The plot moved right along that you really felt like you were walking through the rough terrain of Faelen. You experience the wind blow and the rain droplets when Nym allowed the storm to explode.

I truly enjoyed the book and can’t wait for the next installment. Plus, I love the cover on this book. I can't wait to see what art work will appear on the next book.

I received an ebook copy of this book from Netgalley, and all the opinions stated above are my own.
Posted by Kelly Bridgewater at 5:00 AM